ABOVE: THE SCIENTIST STAFF

University of Chicago immunologist Cathryn Nagler began to suspect that the body’s resident bacteria play a role in food allergies almost two decades ago. A handful of studies of germfree mice in the 1980s and ’90s had suggested that bacteria in the gut, or compounds they produce, such as lipopolysaccharide (LPS), are important in teaching the immune system not to overreact to the foods we eat. But it was a new mouse model of peanut allergy, developed by researchers at Mount Sinai School of Medicine in New York in 2000, that really made Nagler think about whether the gut microbiome might be involved in how humans respond to dietary antigens.

The mouse strain they used, C3H/HeJ, carried a mutation in the toll-like receptor 4 (TLR4). This protein had recently been shown to mediate immune responses triggered by a bacterial antigen known as lipopolysaccharide (LPS), and the mutant mice were consequently nonresponsive to LPS. But according to the 2000 paper, the animals also exhibited anaphylaxis—a sometimes fatal allergic reaction in people—upon exposure to freshly ground peanuts.

It made Nagler wonder if TLR4—and specifically, the propensity of certain gut bacteria to activate it—was the key to tolerance to dietary antigens. Sure enough, when she treated mice with broad-spectrum antibiotics to deplete their intestinal bacteria, even animals with wildtype TLR4 had severe reactions to food allergens. “That established a role of signaling by bacteria in the gut in regulating responses to food,” she says. “And then all of the studies we’ve done since then, over 15 years, have built on that.”

The fact that food allergies have been rising in recent decades really implores us to try to figure out as much as possible what could be contributing to this.

These days, there is little doubt that the body’s resident bacteria have a big say in how the immune system responds to food allergens. Research into the underlying causes of food allergies has blossomed to parallel the condition’s growing prevalence: an estimated 6 percent of children and up to 10 percent of adults in the US have an allergy to some food. Scientists have identified connections between a person’s microbial makeup and whether or not that person has a food allergy. Microbiome differences also help determine which children will outgrow their food allergies and which won’t, notes Supinda Bunyavanich, a physician scientist at Icahn School of Medicine at Mount Sinai. “So it suggests that there is an impact of these microbiota on the clinical outcomes.”

Further research in mice has demonstrated a causal relationship between the microbiome and allergic reactions to food. In January, Nagler and her colleagues published the results of an experiment in which they transferred fecal samples from healthy human infants and from infants with cow’s milk allergy to germfree mice. Control animals that did not receive a fecal transplant, as well as mice that received samples from the allergic babies, became sensitized to the milk protein β-lactoglobulin, developing an allergic response upon repeated exposure to the protein. Mice that had received transplants from healthy infants, on the other hand, tolerated the dietary antigen without any issues.

Exploring the microbiomes of the mice, the researchers identified one particular bacterial species, Anaerostipes caccae, that was significantly reduced in rodents that demonstrated an allergic response to cow’s milk. The team also showed that transferring this species “to germfree mice is sufficient to protect against an allergic response to” cow’s milk, Nagler says. 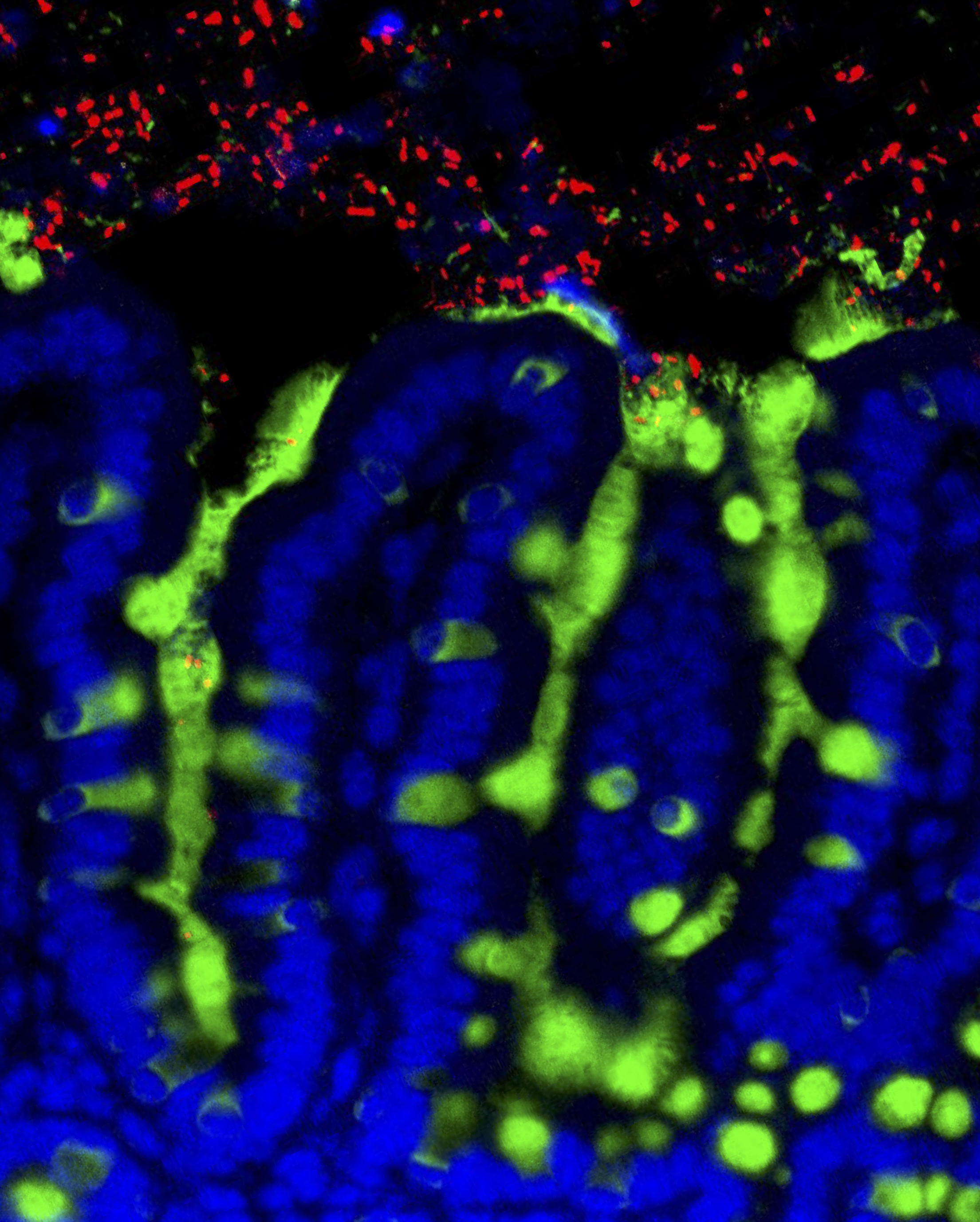 Commensal bacteria (red) in the small intestine of mice that received fecal transplants from babies who are not allergic to cow’s milk protein were protected from becoming sensitized to the allergen.
UNIVERSITY OF CHICAGO

In June, researchers at Boston Children’s Hospital got similar results with a different allergen in a different mouse model. The team found that transplanting fecal material from healthy human babies into their own mouse model of severe egg allergy protected the animals against anaphylaxis, whereas a transplant of fecal material from babies with food allergies provided no such protection. Moreover, they found that feeding allergic mice a consortium of Clostridium or Bacteroides species or even the single species Subdoligranulum variabile was sufficient to provide protection against egg allergy.

“They’re not exactly the same data, but they seem to be very consistent,” study coauthor Rima Rachid, a clinical researcher at Boston Children’s, says of her results and those of Nagler’s group. “We’re very happy, because the science is being validated.”

The mechanisms underlying the bacteria’s effect on response to food allergens appear to be multifaceted. In Rachid’s recent study, the researchers found that the microbes somehow trigger the formation of a type of regulatory T cell called retinoid-related orphan receptor gamma (RoRγ) T cells. If the investigators removed these T cells from their mouse model, the animals had severe reactions to allergen exposure, even after transplants of the protective bacteria. And a study published in May found that germfree or antibiotic-treated mice develop a different type of regulatory T cell that cause elevated level of immunoglobulin E, an antibody that is known to mediate food-allergic reactions. Other work has pointed to a possible role for basophils, immune cells involved in inflammatory responses, and Nagler says she and her colleagues are still working out the role of TLR4.

While researchers continue to untangle these mechanisms, many scientists already have an eye toward microbiome-manipulating interventions for preventing or treating food allergies. Currently, the standard of care for such conditions simply involves avoiding the culpable antigens and being prepared with an epinephrine autoinjector (EpiPen) and an antihistamine in the event of accidental exposures. Immunotherapy, in which patients are exposed to low, increasing doses of an allergen over time, has recently become an option as well, but it only works for some patients, Rachid notes. “There is really an unmet need here for finding better treatment for food allergy.”

Several clinical trials have tested the effects of probiotic supplementation, with promising but mixed results. “When it comes to probiotics, so far the studies done are not very definitive,” says Rachid. The approach is worth pursuing further, she says, noting that she and her colleagues hope to develop probiotics based on the bacterial species they recently identified as protective against food allergy. At the same time, Rachid is overseeing the first clinical trial for fecal transplant for peanut allergy. “It’s a very interesting approach where you’re trying to change the whole microbiome.” The researchers are currently screening potential trial participants.

“There’s tremendous interest in this,” says Bunyavanich, adding that some of her colleagues have started companies to move such approaches forward. “The fact that food allergies have been rising in recent decades really implores us to try to figure out as much as possible what could be contributing to this.”

Jef Akst is the managing editor at The Scientist. Email her at jef.akst@the-scientist.com.

Correction (July 9): This story has been updated to correct the type of food allergen tested by Rima Rachid and colleagues in the described study. It was egg, not peanut. The Scientist regrets the error. 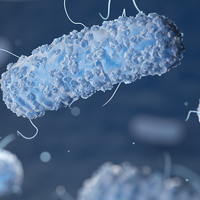 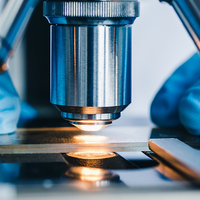